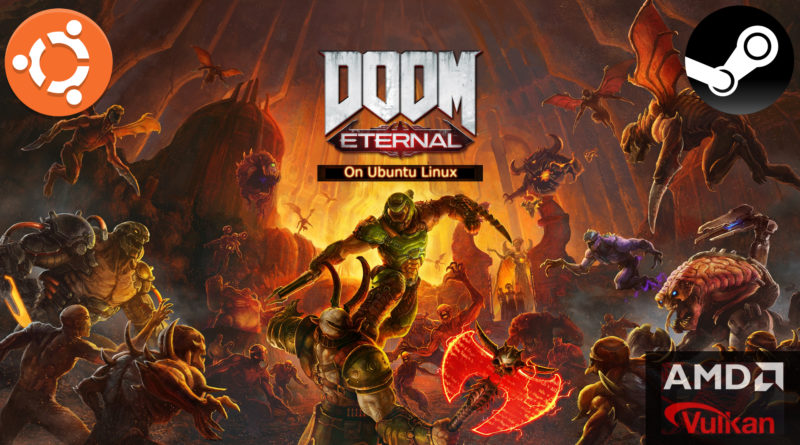 The first days when DOOM Eternal was released trying to play it on Linux required lots of trial and error along with lots of compile time… Now though the requirements are clear and its easy to get it to work.

Update: Ubuntu 20.04 LTS + AMDGPU-PRO 20.40 are at this point tested and delivering the best performance. You can even play Doom Eternal on a 4K resolution with no stuttering.

If you are using an NVIDIA card or another Linux distribution you can check the reports submitted on protondb to get more help.

Follow the steps bellow to make it work with an AMD GPU.

You are going to get the higher FPS by using the latest proprietary AMD drivers. At this time of writing the version is 20.10 released couple of days ago supporting only Ubuntu 18.04.

Update: AMD Proprietary drivers are already released on AMD’s site supporting fully Ubuntu 20.04. After testing them they clearly win in terms of delivering the best performance and higher FPS. Strongly recommended to use those along with AMDVLK.

At this time AMD proprietary drivers are not going to cleanly install. Thats why I personally use the stock driver coming with Ubuntu.

But in order to get decent performance we need to install a most recent version of vulkan. Easiest way, download the latest version of AMD’s proprietary drivers (20.10), extract the archive and install ONLY the vulkan related packages.

Open a terminal, switch to the directory you extracted the files and issue the following command by replacing version with the appropriate one.

The best way at this point to have the most recent packages is to use the Oibaf PPA. Make sure you do not use any other conflicting PPA/packages before switching to this repo.

The only way for the game to start is to make use of a custom Proton version including all the patches/libs needed. At this point I am making use of the excellent work of GloriousEggroll. You will need version Proton-5.6-GE-2 or greater.

Now you are ready to run the game! Rip and Tear!