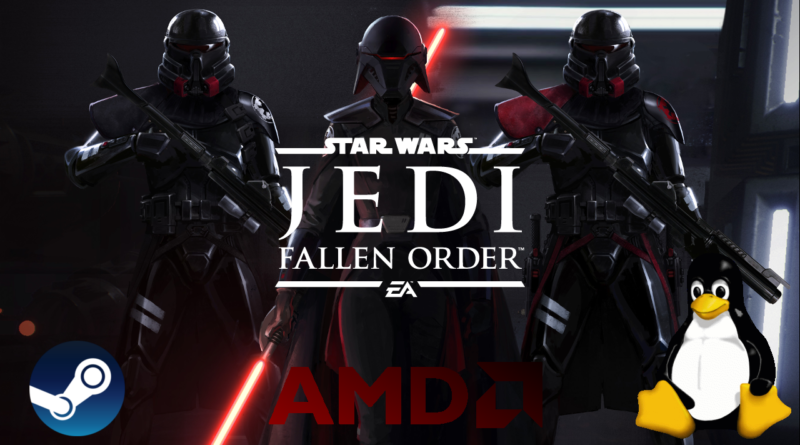 I got this game couple of days ago. At the time the comments on ProtonDB were really mixed… So I thought, what the heck! lets give it a try! I am a Star Wars fan anyway! Only I din’t know the hell I was getting myself into… LOL

In most of my tests the problem was not to start the game, but to find a combination that will make the game playable without FPS drops and steady performance.

I have only tested this game with AMD graphics cards on my main Linux computer running Ubuntu Linux 18.04 LTS, fully updated and using the packages from the excellent repo by Paulo Dias.

Install by issuing the following commands

Now the next step is to connect your Steam account with your Origin account. Unfortunately this step cannot be done via any website or any command line. You have 2 options

Option number one obviously is straight-forward, for the second option you will need a small trick to overcome the “Error Code 3:0”. After some investigation it seems the installer changes the permissions of the “Origin” directory under your WINE Origin installation folder, removing any write access. The most easiest way to overcome this issue is to do the following

The latest Proton version that ships with latest Steam for Linux it just does not work as it’s missing tons of stuff needed. Fetch the latest custom Proton from GloriousEggRoll on Github and extract under ~/.steam/root/compatibilitytools.d/ then restart Steam.

Next, right click on your game on Steam, select “Properties”, then under the “General” tab click on the “LAUNCH OPTIONS” button and enter the following

On the same window now click on the “Force the use of a specific Steam Play compatibility tool” and select from the drop-down list your latest Proton version that you downloaded and extracted previously.

then find the following key

The game uses a few videos that will not play by default. These are not the cut-scenes, they are some tutorial videos shown when you check your abilities and the default startup ones.

I tried to fix this by using the excellent mf-install by z0z0z but I had no luck with this game.

After a successful install of mf-install the game will start and get stuck after a few seconds.

As a workaround I moved the mp4 files from <steam library>/steamapps/common/Jedi Fallen Order/SwGame/Content/Movies/ to a different directory. This fixed the issue, but leaves you with a black screen and you just waiting until the program continues (check my video).

May the Force be with YOU

At this point you should have a working installation.

You may need to click on the Origin client several times to start the game, make sure to open the top command on a terminal and check if the process is dying. If so you will just need to start it again via the client, do it multiple times and eventually it will work LOL. You can see in my video I have tried 2 times to start the game… No workaround for that… Not yet!

Hopefully the game will work for you as well and you will be able to enjoy it by playing it under Linux!